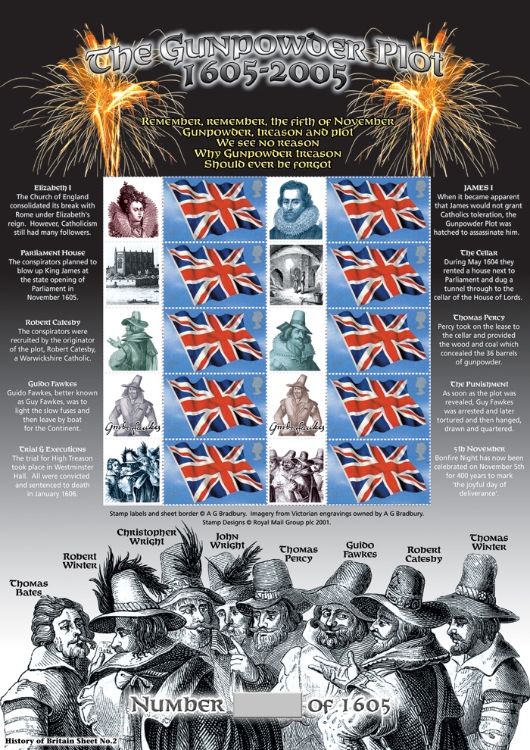 2005 marks the 400th anniversary of the Gunpowder Plot which took place in 1605. As there is to be no stamp issue to mark this important event in British history, I have designed a special customised sheet as shown above. This is a limited numbered edition of just 1,605 sheets. Each of the ten specially designed labels have the following text alongside charting the history of the failed attempt to blow up Parliament.

Elizabeth I
The Church of England consolidated its break with Rome under Elizabeth's reign. However, Catholicism still had many followers.

James I
When it became apparent that James would not grant Catholics toleration, the Gunpowder Plot was hatched to assassinate him.

Parliament House
The conspirators planned to blow up King James at the state opening of Parliament in November 1605.

The Cellar
During May 1604 they rented a house next to Parliament and dug a tunnel through to the cellar of the House of Lords.

Robert Catesby
The conspirators were recruited by the originator of the plot, Robert Catesby, a Warwickshire Catholic.

Thomas Percy
Percy took on the lease to the cellar and provided the wood and coal which concealed the 36 barrels of gunpowder.

Guido Fawkes
Guido Fawkes, better known as Guy Fawkes, was to light the slow fuses and then leave by boat for the Continent.

The Punishment
As soon as the plot was revealed, Guy Fawkes was arrested and later tortured and then hanged, drawn and quartered.

Trial & Executions
The trial for High Treason took place in Westminster Hall. All were convicted and sentenced to death in January 1606.

5th November
Bonfire Night has now been celebrated on November 5th for 400 years to mark 'the joyful day of deliverance'.