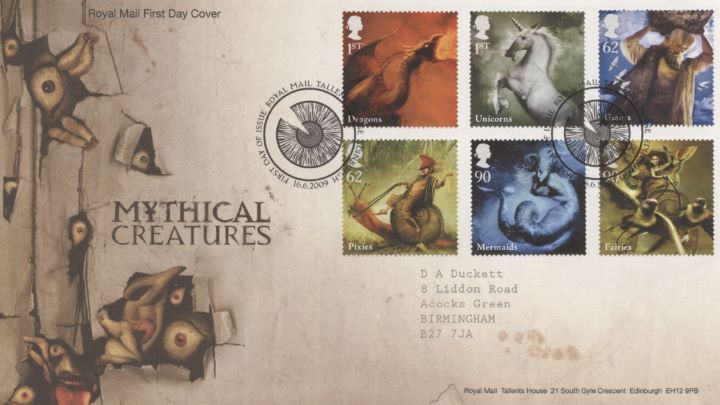 From the land of the giants, to the prank-loving world of the pixies, the UK has a rich history of folklore and legend dating back to the oral tales handed down the generations by Celtic bards - and brought right up to date through Harry Potter and the hugely successful Dragonology books. Mythical Creatures features a collection of six wonderful beasts and creatures brought to life through the brilliant illustrations of Dave McKean.

But is this really what they look like? Who can tell, but one thing’s for sure, it’s the hold these creatures have upon the imagination that has ensured their images have been incorporated into everything from heraldry to architecture.

Perhaps that’s also why the popularity of these creatures remains undiminished to this day thanks to the success of the works of authors such as JRR Tolkien, CS Lewis, Michael Moorcock, Neil Gaiman and Terry Pratchett, together with the vast array of CGI animated films and computer games.

A range of illustrators were commissioned by designers Morgan-Radcliffe to create images of Mythical Creatures. Dave McKean, an illustrator who is perhaps best known for his work on graphic novels was eventually selected as his work had a dramatic and contemporary look – and his often frightening images for this issue have certainly breathed life into these strange creatures. The stamps are printed in separate Sheets, not se-tenant pairs.

Traditionally represented as a horse with a single horn, a billy goat’s beard, cloven hooves and a lion’s tail, perhaps the unicorn made sense of travellers’ descriptions of the rhinoceros? Two unicorns support the Coat of Arms of Scotland, while one together with a lion the Coat of Arms of the United Kingdom.

Common to the mythologies of many countries the dragon has a reptilian body, traditionally breathes fire or spits poison and often has a pair of bat like wings. Often the guardian of treasure hordes, and frequently the terror of fair maids.

Apart from the famous associations with St George and the red dragon of Wales, dragons also appear in the Mabinogion, a series of 12 medieval Welsh stories.

Or Piskies as they are known in their native West Country look like old men with wrinkled faces. They are small in stature with red hair and dress in the colours of the earth especially green, usually cheerful and helpful, but they also like playing pranks.

Part woman and part fish the Mermaid would often entrance sailors with their song causing them to run ships aground or jump overboard, then carry them off to their undersea home forgetting that they breathe air.

Sometimes good and sometimes bad, the fairy folk come in many forms; here Queen Mab takes to the air in her hazelnut chariot. Queen Mab is described in Shakespeare’s Romeo and Juliet as a tiny fairy who drives her chariot across the faces of sleeping people.