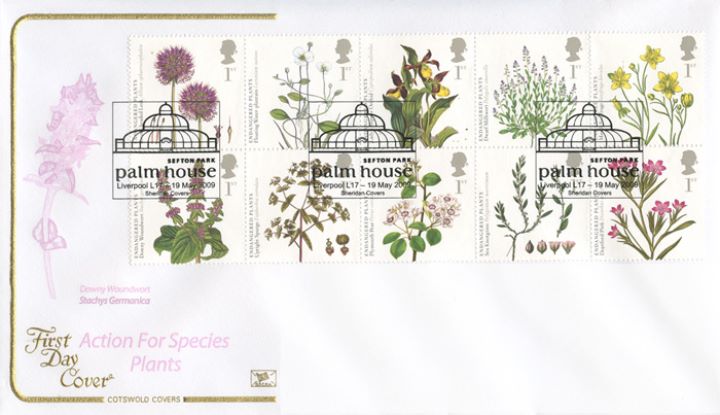 Often overlooked, plants are at the base of the food chain and without them no other life forms could exist. However agricultural practices, urbanisation, and pollution have taken their toll, and now almost two in every five wild plants in the UK are of conservation concern.

Despite their threatened status, the ten plants selected for inclusion in this stamp series represent a degree of recent conservation success.

The Plants stamp issue celebrates the vital part flora plays in our planet’s bio-diversity and is the third in Royal Mail’s Action for Species series, which looks at the UK’s endangered flora and fauna. The first in the series, Birds, was issued in September 2007, the second, Insects, was issued in April 2008.

To celebrate the 250th anniversary of the Royal Botanic Gardens at Kew a Miniature Sheet of four stamps will be issued on the same date. Kew has a lead role in conserving biodiversity through its scientific and conservation work.

Experts from conservation groups including the Royal Botanic Gardens and the Natural History Museum were consulted to arrive at a short list of ten endangered plants.

Studio Dempsey was commissioned to produce a block of ten First Class Stamps using examples of botanical art to display the selected plants.

This is a form of illustration designed to show off all the features of a specimen, often with a greater level of detail than photography is able to. Some illustrations are from Kew's own extensive collection of botanical art.

The Miniature Sheet was designed by Kate Stephens and utilises existing photography of some of Kew’s landmark buildings set against the background of a palm leaf.

Stamp by Stamp - all 1st Class

(Allium sphaerocephalon) was first discovered in 1847, in the Avon Gorge near Bristol. It has since been introduced in a very few, scattered locations. Floating Water-Plantain (Luronium natans) spread eastwards from its core natural habitats in the lakes of Snowdonia and mid Wales in the 19th century, taking advantage of the canal network. In recent decades, however, pollution and recreational boating have led to its disappearance from many lowland waterways.

(Cypripedium calceolus) has the misfortune to qualify as one of Britain’s rarest plant, having been reduced in the wild to a single specimen in West Yorkshire. Over-grazing, and centuries of over-collecting by gardeners and botanists are to blame for its virtual extinction in Britain.

(Polygala amarella), long known from the chalk grasslands of the North Downs in Kent and the limestone grasslands of Yorkshire, has declined in recent years, particularly in Kent.

(Saxifraga hirculus), a rare wild flower of wet moorland and mountain bogs, is now reduced to a few localities, chiefly in the northern Pennines and north-east Scotland, with recent losses attributed to land drainage, over-grazing or afforestation.

(Stachys germanica) may once have been more widespread, but declined markedly in the 19th century, and is now confined to a small area of Oxfordshire, where it grows mostly along the verges of ancient green lanes and wood borders overlying oolitic limestone.

(Euphorbia serrulata) is found mostly in a few woodlands in Gloucestershire and Monmouthshire. Cessation of tree cutting and coppicing, which traditionally created well-lit clearings, is probably to blame for its decline.

(Pyrus cordata) is a British wild pear that was discovered in 1865 in hedge-banks outside the city of Plymouth. Today, only a few hundred trees exist, in just seven locations. Sea Knotgrass (Polygonum maritimum) grows just above the high-tide level in a few places along the southern coast of England and Ireland. A Mediterranean species on the edge of its range in southern Britain, it is vulnerable to exceptional tides.

(Dianthus armeria) was once widespread, but over the past 60 years it has suffered one of the most rapid declines of any species in the British flora, as the dry pastures, field borders and hedgerows it needs have steadily disappeared. It is now restricted to about two dozen sites in England and Wales.