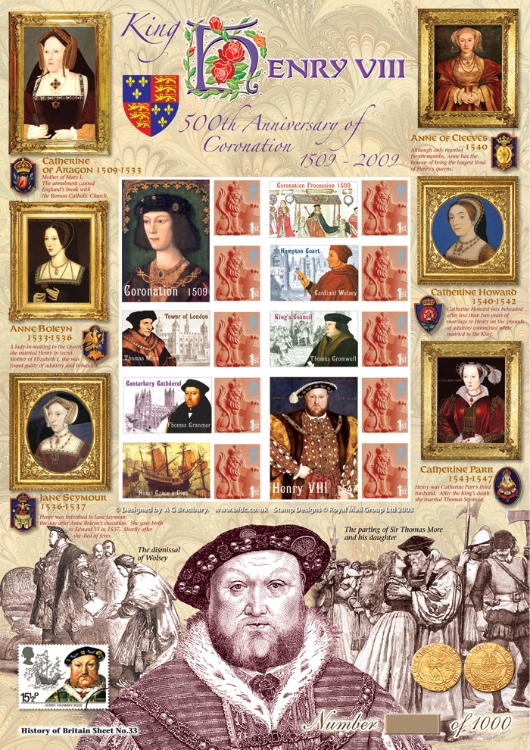 Click on image for larger view
BUY NOW + Wishlist
Date:
21st April 2009
Issue:
Coronation of Henry VIII Stamp Sheet (Smilers®)
StockCode:
30211
Price:
£25
Producer/Series:
A G Bradbury, History of Britain 33
Themes:
Historical Kings & Queens Heraldry
The sheet is limited to 1000 numbered copies.
Details
2009 marks the 500th anniversary of the coronation of Henry VIII. My sumptuous sheet for this anniversary features his six wives around the top and middle portion of the border with images at the foot showing the dismissal of Wolsey and the parting of Sir Thomas More with his daughter just before his execution.

The principal stamp labels feature Henry VIII at the time of the Coronation and again in later life. Also featured are the Coronation Procession, Cardinal Wolsey and Hampton Court, Thomas More and the Tower, Thomas Cromwell and the King's Council, Thomas Cranmer and Canterbury Cathedral, and the Henri Grace a Dieu.