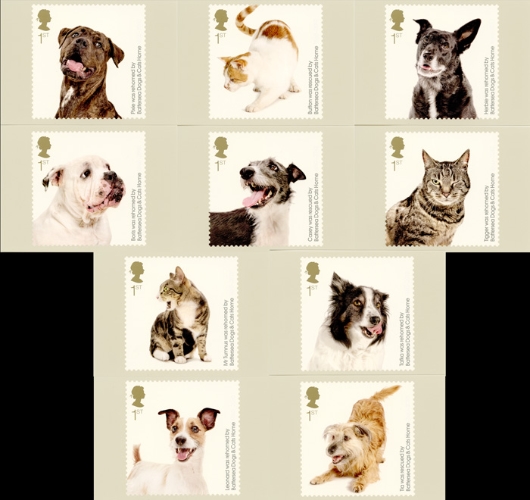 ‘We aim never to turn away a dog or cat in need of our help’ – that’s the simple message of the Battersea Dogs & Cats Home, and one hundred and fifty years since its formation, it remains true to its word.

The world famous rescue centre has come a long way since 1860, when the temporary home for ‘Lost and Starving Dogs’ was established by Mary Tealby, in Holloway, North London. Eleven years later it moved to Battersea and in 1883 it started taking in cats as well.

From there they reunite lost dogs and cats with their owners through their Lost Dogs & Cats Line, or care for them until new homes can be found; giving them shelter and the highest standards of kennelling and veterinary care.

Ten animals that have been found new homes by the Battersea Dogs & Cats Home were selected by Royal Mail’s design team and photographed by animal photographer Steve Hoskins, whose assistant also works part-time at the home.

The cats and dogs were photographed in two sessions – one at Battersea and the other at the home’s Old Windsor centre - and the priority was to capture the character and dignity of these one-time abandoned pets.

Clearly taking photographs of animals awaiting rehoming and ‘on their own’ under the bright lights of a studio would have been inappropriate, so apart from Button, the dogs and cats featured on the stamps live with staff who work within the organisation.

The owners obviously played their part in ensuring that their pets were on their best behaviour, however the use of a ‘Ham Wrangler’ (on hand to offer the ‘models’ tempting slices of meat) proved very effective at keeping attentions focused on the job in hand.

Pixie is a two-year-old Mastiff cross who has been rehomed.

Button is a five-year-old Domestic Short Hair cross rescued by the home.

Herbie is a seven-year-old Mongrel who was taken in by Battersea as a puppy and subsequently rehomed.

Tafka is a seven-year-old Border Collie who was taken in when his owner died, he has since been rehomed.

Two to three-year-old Boris is a Bulldog cross who has been rehomed by Battersea.

Casey is five to six-year-old Lurcher rescued by the home.

Leonard is a two to three-year-old Jack Russell cross rehomed by Battersea.

Tia is a nine-year-old Terrier cross rescued by the home.

Ten postcards bearing enlarged images of each of the Battersea Dogs & Cats Home stamps go on sale about a week before the stamp issue date.