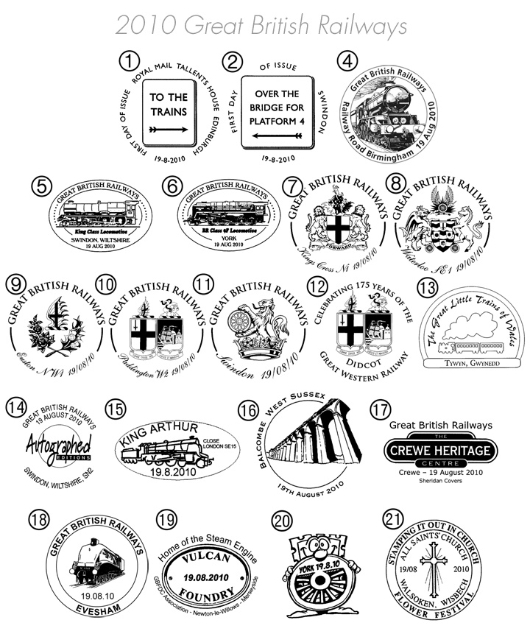 This year marks the 50th Anniversary of the building of British Rail’s last steam locomotive, the 9F Class Evening Star, and a wonderful opportunity to celebrate the locomotives of the ‘Big Four’ railway companies.

The steam locomotive has long been more than a piece of machinery; symbolising an age of unprecedented mobility and British industrial prowess, when the locomotive rapidly became a powerful marketing tool.

The engine that first secured the future of steam locomotion was of course Stephenson’s Rocket, at the 1829 Rainhill Trials in Merseyside, which won the crowd’s imagination as much with its bright yellow paintwork as the stunning top speed of 29mph.

By the end of the 19th century, numerous private railway companies competed fiercely across the British Isles. Their best passenger trains were by world standards fast, comfortable – and needed to be filled if money was to be made.

In 1923 with profits diminishing due to the increasing competition from cars, buses and lorries, over 120 private railway companies were merged into the Big Four: the London, Midland & Scottish (including the Northern Counties Committee (NCC) in Northern Ireland), the London & North Eastern, the Great Western and the Southern Railways.

After the Second World War the Big Four became British Railways (BR) in 1948, with the Ulster Transport Authority (UTA) taking responsibility for most routes in Northern Ireland.

In March 1960, Evening Star brought to an end over 130 years of steam-locomotive building for Britain’s mainline railways, leaving Swindon Works in a blaze of publicity in 1960, destined for a working life of only five years. This year also marks the 175th Anniversary of the GWR.

Railway expert Professor Colin Divall was consulted to determine the most appropriate locomotives to feature in the issue in order to give fair representation to the whole of the UK and the big four railway companies that operated the network prior to the formation of British Rail in 1948. These companies were Southern Region (SR), the Great Western Railway (GWR), London Midland and Scottish (LMS) and London North East Region (LNER). To cover Northern Ireland the Northern Counties Commission (NCC) of Northern Ireland (a subsidiary of the LMS) was included together with British Rail itself.

Brian Delaney of Delaney Design Consultants, trawled through thousands of photographs to find these – all are amazingly contemporary photos.

This is the first in a series of stamp issues to celebrate British locomotive heritage. From 2011 a series of miniature sheets will commemorate classic locomotives of the UK.

The streamlined Coronation Class locomotive Coronation of the London Midland and Scottish Railway at the platform in London’s Euston Station in 1938. Introduced at the height of the 1930s streamlining craze and named in honour of the accession of King George VI, a Coronation was displayed at the 1939 New York World’s Fair. The streamlining was removed in the 1940s to save on maintenance.

Evening Star, the last of the British Rail Class 9F locomotive is shown here at Midsomer Norton in 1962. The 9F was designed to pull heavy freight trains. But a few, like Evening Star, were used on passenger services, particularly on the steeply graded Somerset and Dorset line.

The photograph shows the Great Western Railway’s King Class locomotive – King William IV near Teignmouth in 1935. The Kings were the GWR’s star locomotives, equally at home on heavy holiday trains and crack business expresses. Publicised as the UK’s most powerful express steam engine, the sleek lines of King George V wowed crowds when touring the USA in 1927.

Named after a character from the legends of King Arthur the Southern Region King Arthur Class locomotive, Sir Mador de la Porte, was photographed at Bournemouth Central Station between 1935 – 1939. The King Arthurs proved to be fine locomotives capable of handling the Southern’s heaviest express trains. Displaced by more modern engines from the 1940s, they hauled secondary services into the 1960s.

A London Midland and Scottish Northern Counties Committee Class WT – Engine No 2 shown here at Larne Harbour, circa 1947 Based on a standard LMS design but built for the wider Irish track, the WTs were the last new steam locomotives delivered to the NCC. Widely known as ‘Jeeps’, they were a highly successful engine used on both passenger and goods trains.

Six postcards bearing enlarged images of each of the Great British Railways stamps go on sale about a week before the stamp issue date. Printed by Fulmar Colour Printing Company Ltd.