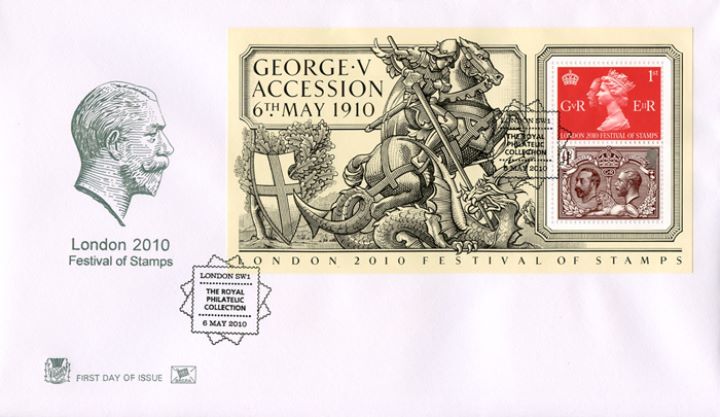 The above Royal Mail King George V: Miniature Sheet stamps were issued on 06 May 2010 by Royal Mail and feature the following stamp designs: 1st Queen Elizabeth & King George V; £1 King George V Downey and Mackennal Heads. The George V first day cover with the London SW1, The Royal Philatelic Collection, Special Handstamp postmark has been produced by Stuart and features these stamps which can make a very collectible and lovely gift.

The first, The Accession of King George V, celebrates the centenary of the accession of the philatelist king, and is issued on the exact anniversary date, 6 May.

The second sheet, The King’s Stamps Miniature Sheet, is issued on 8 May to mark the start of the eight-day exhibition, during which thousands of collectors from around the world will descend on the capital for this major decennial exhibition.

The London 2010 Festival of Stamps is a year long programme of exhibitions, activities and events to celebrate stamps and philately and its theme is the reign of King George V.

The First Class stamp on The Accession of King George V Miniature Sheet features the familiar Machin profile of Queen Elizabeth II, superimposed over the profile of George V designed by the Australian sculptor Bertram Mackennal and used on the stamps of King George V from 1912 onwards. The stamp features both royal ciphers and the text London 2010 Festival of Stamps along the lower edge.

The £1 stamp shows the Mackennal profile on the right while the left hand side shows the three quarter profile of George V engraved by JAC Harrison from a photograph by W & D Downey, the court photographers, which was used on the first definitive stamps of the reign, until the Mackennal head supplanted it in 1912. These are contained within wreaths with a crown centre top, and a couchant lion on the lower edge.

The border features a detail inspired by the engraving of St George and the Dragon by Bradbury Wilkinson & Co from the 1929 ninth Universal Postal Union Congress stamps. The sheet will be printed by lithography.

The King’s Stamps Miniature Sheet reproduces classic stamps from the reign of George V. It features two reproductions of the 1924 British Empire Exhibition stamps designed by Harold Nelson set within a contemporary border with the present value (1st) and Queen’s head profile and two reproductions of the “Seahorses” design by Bertram Mackennal, high value definitive originally issued between 1913 – 1918 again set within a contemporary border with the value (£1) and Queen’s head. The Miniature Sheet will be printed by a combination of lithographic and intaglio printing techniques.

The top of the Miniature Sheet’s plain border contains the text: London 2010 Festival of Stamps with a crown.

The Elizabeth II Machin head is superimposed above a Mackennal profile of King George V together with both royal ciphers. This stamp will also be available as sheet stamps.

The one pound stamp features both the Downey and Mackennal profiles of George V that were used on stamps between 1910 and 1936.

The 1st Class stamp will also be printed in sheets and on sale in Post Offices from 6 May.

The Presentation Pack designed by Sedley Place, written by Douglas Muir, Curator, Philately, at The British Postal Museum and Archive and contains both London 2010 Festival of Stamps Miniature Sheets.

An uncut sheet of 20 Miniature Sheets. There is a limited edition of 2010 available.

This uncut sheet of nine Miniature Sheets is printed intaglio to be as faithful as possible to the original stamps. There is a limited edition of 2010 available.

A complete set of enlargements of all six stamps from the two 2010 Festival of Stamps Miniature Sheets and the Miniature Sheets printed on eight postcards will go on sale a week prior to the issue date.

The Prestige Stamp Book has been designed by Silk Pearce and written by Douglas Muir. It contains unique stamp panes unavailable anywhere else. The intaglio/lithography panes were printed by Joh Enschedé Stamps, The Machin pane was printed in self-adhesive gravure by Walsall Security Printers, while the rest of the book and the purely litho stamp pane was printed by Cartor Security Printing.