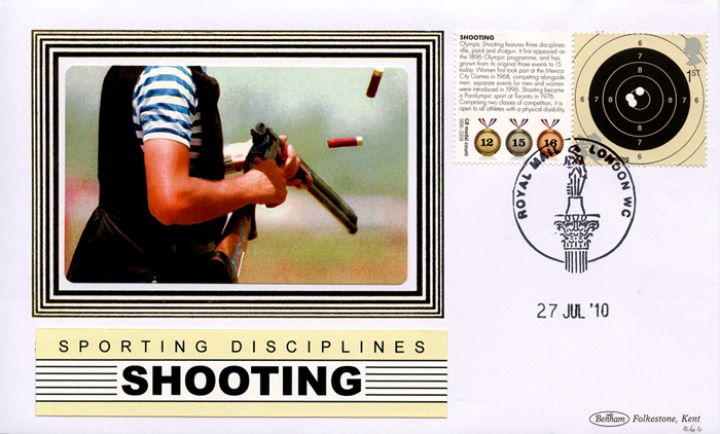 The new issue is the second set in this series, subtitled ‘On Track for 2012’, it contains a new set of ten dynamic images is issued exactly two years before the opening ceremony of the London 2012 Olympic Games.

The stamps are printed in two sheets, each bearing se-tenant strips of five stamps.

In all, 29 different sports are played across the Olympic Games and Paralympic Games. There will be one stamp design for each sport with the exception of athletics which will be presented across two stamps as ‘Athletics: track’ and ‘Athletics: field’.

The 30 sporting areas were divided into three sets of ten to ensure a balance of team and individual events, and Olympic and Paralympic sports for each year of issue. Great care was also taken to ensure that a balance of ball and water sports was maintained across the three stamp issues.

Royal Mail’s design team and David Hillman, from Studio David Hillman, set to work allocating each sport to one of the hand-picked image makers he approached to work on this three-year project.

Royal Mail also consulted with the sports’ governing bodies and specialist clubs for each and every stamp.

The ten stamps are printed on two se-tenant sheets. Each individual design is therefore available in vertical strips of five.

The fully illustrated Presentation Pack contains the ten Olympic and Paralympic Games stamps.
Inside former Daily Mail sports news editor Ian Cole takes a look at each of the sports featured.
The pack was designed by GBH and printed by Walsall Security Printers.

Ten postcards bearing enlarged images of each of the Olympic and Paralympic Games stamps go on sale about a week before the stamp issue date. Printed by Fulmar Colour Printing Company Ltd.