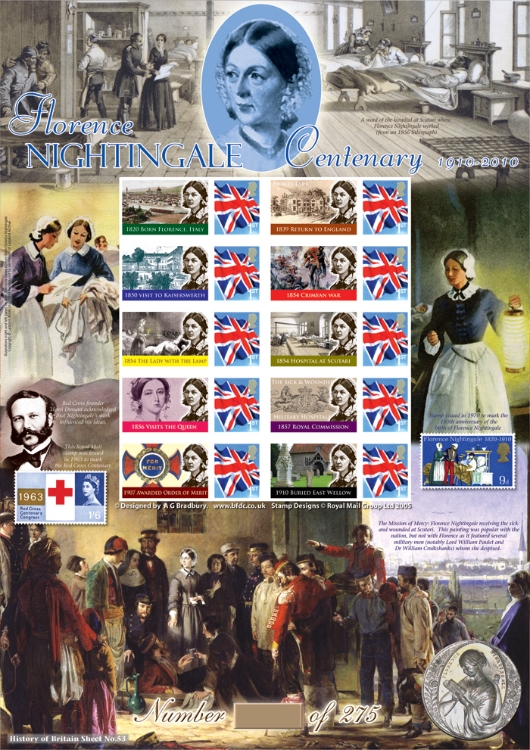 Click on image for larger view
BUY NOW + Wishlist
Date:
1st March 2010
Issue:
Florence Nightingale Stamp Sheet (Smilers®)
StockCode:
34063
Price:
£125
Producer/Series:
A G Bradbury, History of Britain 53
Themes:
Military Medical & Health War & Conflict Historical
The sheet is limited to 275 numbered copies.
Details
Florence Nightingale, OM, RRC (12 May 1820  13 August 1910) was an English nurse, writer and statistician. She came to prominence during the Crimean War for her pioneering work in nursing, and was dubbed "The Lady with the Lamp" after her habit of making rounds at night to tend injured soldiers. Nightingale laid the foundation stone of professional nursing with the principles summarised in the book 'Notes on Nursing'. The Nightingale Pledge taken by new nurses was named in her honour, and the annual International Nurses Day is celebrated around the world on her birthday.

Florence Nightingale was born into a rich, upper-class, well-connected British family at the Villa Colombaia, near the Porta Romana in Florence, Italy, and was named after the city of her birth.

Inspired by what she took as a Christian divine calling, which she experienced first in 1837 at Embley Park and later throughout her life, Florence announced her decision to enter nursing in 1845, despite the intense anger and distress of her family, particularly her mother. In this, she rebelled against the expected role for a woman of her status, which was to become a wife and mother. Nightingale worked hard to educate herself in the art and science of nursing, in spite of opposition from her family and the restrictive societal code for affluent young English women.

She cared for people in poverty. In December 1844, she became the leading advocate for improved medical care in the infirmaries and immediately engaged the support of Charles Villiers, then president of the Poor Law Board. This led to her active role in the reform of the Poor Laws, extending far beyond the provision of medical care. She was later instrumental in mentoring and then sending Agnes Elizabeth Jones and other Nightingale Probationers to Liverpool Workhouse Infirmary.

Florence Nightingale's most famous contribution came during the Crimean War, which became her central focus when reports began to filter back to Britain about the horrific conditions for the wounded. On 21 October 1854, she and a staff of 38 women volunteer nurses, trained by Nightingale and including her aunt Mai Smith, were sent (under the authorization of Sidney Herbert) to Turkey, about 545 km across the Black Sea from Balaklava in the Crimea, where the main British camp was based.

Nightingale arrived early in November 1854 at Selimiye Barracks in Scutari. She and her nurses found wounded soldiers being badly cared for by overworked medical staff in the face of official indifference. Medicines were in short supply, hygiene was being neglected, and mass infections were common, many of them fatal. There was no equipment to process food for the patients.

Death rates did not drop; on the contrary, they began to rise. The death count was the highest of all hospitals in the region. During her first winter at Scutari, 4,077 soldiers died there. Ten times more soldiers died from illnesses such as typhus, typhoid, cholera and dysentery than from battle wounds. Conditions at the temporary barracks hospital were so fatal to the patients because of overcrowding and the hospital's defective sewers and lack of ventilation. A Sanitary Commission had to be sent out by the British government to Scutari in March 1855, almost six months after Florence Nightingale had arrived, and effected flushing out the sewers and improvements to ventilation. Death rates were sharply reduced.

Nightingale continued believing the death rates were due to poor nutrition and supplies and overworking of the soldiers. It was not until after she returned to Britain and began collecting evidence before the Royal Commission on the Health of the Army that she came to believe that most of the soldiers at the hospital were killed by poor living conditions. This experience influenced her later career, when she advocated sanitary living conditions as of great importance. Consequently, she reduced deaths in the army during peacetime and turned attention to the sanitary design of hospitals.

During the Crimean campaign, Florence Nightingale gained the nickname "The Lady with the Lamp", deriving from a phrase in a report in The Times: She is a  ministering angel without any exaggeration in these hospitals, and as her slender form glides quietly along each corridor, every poor fellow's face softens with gratitude at the sight of her. When all the medical officers have retired for the night and silence and darkness have settled down upon those miles of prostrate sick, she may be observed alone, with a little lamp in her hand, making her solitary rounds.