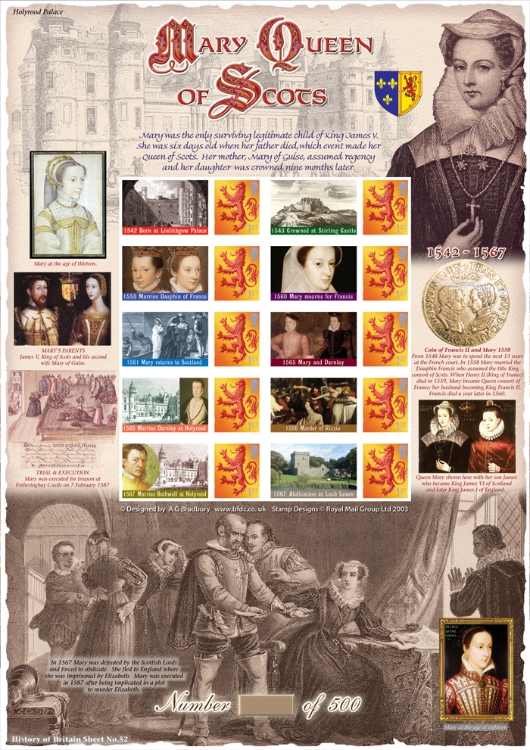 Click on image for larger view
BUY NOW + Wishlist
Date:
1st March 2010
Issue:
Mary Queen of Scots Stamp Sheet (Smilers®)
StockCode:
32861
Price:
£45
Producer/Series:
A G Bradbury, History of Britain 52
Themes:
Scotland Kings & Queens Historical
The sheet is limited to 500 numbered copies.
Details
Mary I (popularly known in the English-speaking world as Mary, Queen of Scots and, in France, as Marie Stuart) (8 December 1542 – 8 February 1587) was Queen of Scots from 14 December 1542 to 24 July 1567. She was the only surviving legitimate child of King James V. She was six days old when her father died, which event made her Queen of Scots. Her mother, Mary of Guise, assumed regency and her daughter was crowned nine months later.

In 1558, she married Francis, Dauphin of France, who ascended the French throne as Francis II in 1559. However, Mary was not Queen of France for long; she was widowed on 5 December 1560. After her husband's death, Mary returned to Scotland, arriving in Leith on 19 August 1561. Four years later, she married her first cousin, Henry Stuart, Lord Darnley. Their union was unhappy and in February 1567, Darnley was found dead in the garden at Kirk o'Field, after a huge explosion in the house.

She soon married James Hepburn, 4th Earl of Bothwell, who was generally believed to be Darnley's murderer. Following an uprising against the couple, Mary was imprisoned in Loch Leven Castle on 15 June and forced to abdicate the throne in favour of her one-year-old son, James VI. After an unsuccessful attempt to regain the throne, Mary fled to England seeking protection from her first cousin, Queen Elizabeth I, whose kingdom she hoped to inherit. Elizabeth, however, ordered her arrest, because of the threat presented by Mary, who was considered the legitimate sovereign of England by many English Catholics (including participants in the Rising of the North). After a long period of custody in England, she was tried and executed for treason following her involvement in three plots to assassinate Elizabeth.