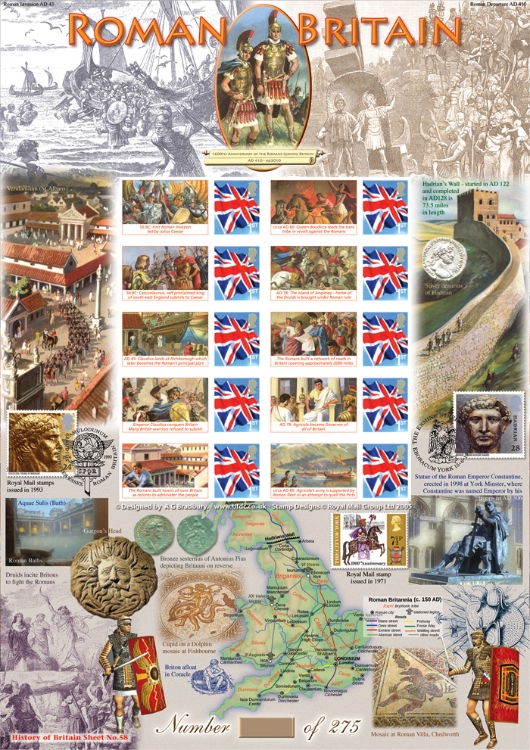 Roman Britain was those parts of the island of Great Britain controlled by the Roman Empire between AD 43 and about 410. The Romans referred to their territory as Britannia, which eventually consisted of all of the island south of the shifting frontier with Caledonia. Prior to the Roman invasion, Iron Age Britain already had cultural and economic links with Continental Europe, but the invaders introduced new developments in agriculture, urbanization, industry and architecture, leaving a legacy that is still apparent today. Historical records beyond the initial invasion are sparse, although many Roman historians mention Britannia in passing, and the names of many of its governors are known. Most knowledge of Roman Britain stems from archaeological investigations and especially epigraphic evidence.

The first Romans to campaign extensively in Britain were the forces of Julius Caesar in 55 and 54 BC, but the first significant conquest did not begin until AD 43, under Claudius. The Romans established a provincial government and steadily extended their control north, but were never able to exert firm control over Caledonia. Following the conquest of the native Britons, a distinctive Romano-British culture emerged. The Romans cemented the province's northern border with Hadrian's Wall, completed around 128. In 142, they pushed the frontier north to the Forth-Clyde line, constructing the Antonine Wall, but they retreated back to Hadrian's Wall after only twenty years. Around 197, Britannia was divided into two provinces, Britannia Superior and Britannia Inferior; in 293, it was subdivided even further and made into an imperial diocese. For much of the later period, Britannia was subject to barbarian invasion and often came under the control of imperial usurpers and pretenders. The Romans largely departed from Britain around 410, leading to what is known as the sub-Roman period, but the legacy of the empire was felt for hundreds of years.