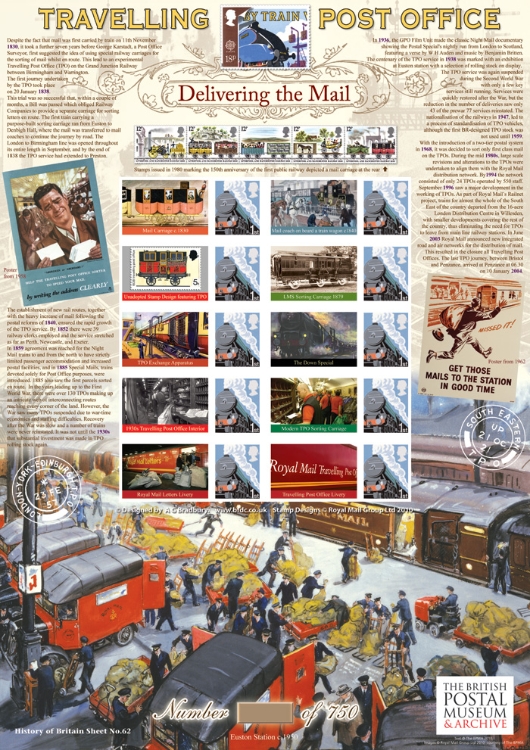 The third stamp sheet in the series 'Delivering the Mails' produced in association with the British Postal Museum & Archive I have given a percentage of the proceeds from the sales of this sheet totalling £2,000 to the BPMA to support their charitable educational work.

As early as 1826 Rowland Hill had written about the possibility of sorting letters along the road in specially fitted mail coaches. Despite the fact that mail was first carried by train on 11th November 1830, it took a further seven years before George Karstadt, a Post Office Surveyor, first suggested the idea of using special railway carriages for the sorting
of mail whilst en route.

This lead to an experimental Travelling Post Office (TPO) on the Grand Junction Railway between Birmingham and Warrington. The first TPO was a converted horse box and was manned by Edward Ellis and Henry Mellersh together with George Karstadt s son, Frederick. The first journey undertaken by the TPO took place on 20 January 1838.

This trial was so successful that, within a couple of months, a Bill was passed which obliged Railway Companies to provide a separate carriage for sorting letters en route. The first train carrying a purpose-built sorting carriage ran from Euston to Denbigh Hall, where the mail was transferred to mail coaches to continue the journey by road. The
London to Birmingham line was opened throughout its entire length in September, and by the end of 1838 the TPO service had extended to Preston.

The establishment of new rail routes, together with the heavy increase of mail following the postal reforms of 1840, ensured the rapid growth of the TPO service. By 1852 there were 39 railway clerks employed and the service stretched as far as Perth,
Newcastle, and Exeter.

In 1859 agreement was reached for the Night Mail trains to and from the north to have strictly limited passenger accommodation and increased postal facilities, and in 1885 Special Mails, trains devoted solely for Post Office purposes, were introduced.
1885 also saw the first parcels sorted en route.

In the years leading up to the First World War, there were over 130 TPOs making up an intricate web of interconnecting routes reaching every corner of the land. However, the War saw many TPOs suspended due to war-time economics and staffing difficulties. Recovery after the War was slow and a number of trains were never reinstated. It was not until the 1930s that substantial investment was made in TPO rolling stock again.

In 1936, the GPO Film Unit made the classic Night Mail documentary showing the Postal Special's nightly run from London to Scotland. Featuring a verse by W H Auden and music by Benjamin Britten, the original production budget was set at £2000 but upon completion it had cost an estimated £3546. However, even from its first public showing at the Arts Theatre, Cambridge, it was apparent that it would be a great success.

The centenary of the TPO service in 1938 was marked with an exhibition at Euston station. A selection of Rolling Stock was on display, including a replica of an 1838 sorting carriage. There was also a working model representing the  Down and Up Special , a term assigned by the Post Office in 1923 to the Euston-Aberdeen TPO.

The TPO service was again suspended during the Second World War, from 1940 until 1945. During this period a few key services still ran as  bag tenders , trains which only carried closed bags of mail. Services were quickly restored after the War, but the reduction in the number of deliveries saw only 43 of the prewar 77 services reinstated.

The nationalisation of the railways, following the Transport Act in 1947, led to a process of standardisation of TPO vehicles, although the first BR-designed TPO stock was not used until 1959.

With the introduction of a two-tier postal system in 1968, it was decided to sort only first class mail on the TPOs. This led to the withdrawal of a few marginal TPOs on economic grounds. During the mid 1980s, large scale revisions and alterations to the TPOs were undertaken to align them with the Royal Mail Distribution network, reducing the number of TPOs to 35 in 1988. The network in 1994 consisted of only 24 TPOs operated by approximately 550 staff.

In September 1996 there was a major development in the working of TPOs. As part of Royal Mail s Railnet project, trains for almost the whole of the South-East of the country now depart from the 16-acre London Distribution Centre in Willesden, and smaller developments will cover the rest of the country. This will eventually eliminate the need for TPOs to leave from main line railway stations. The last TPO from Bristol to Penzance ran on 10th January 2004.