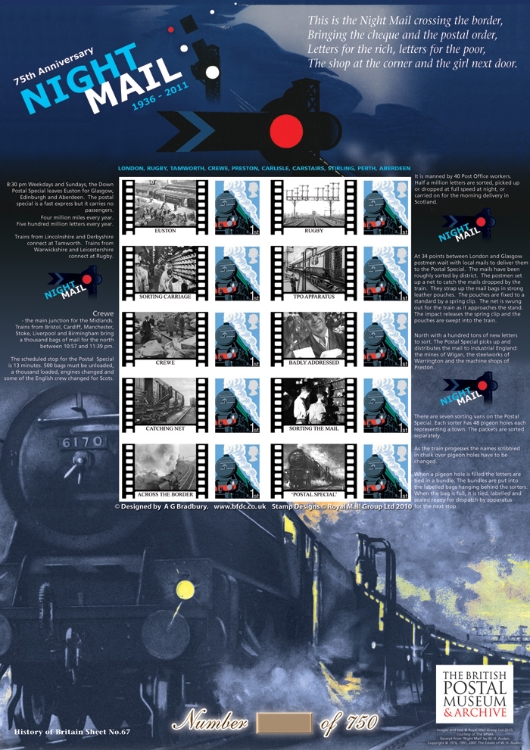 The fifth stamp sheet in the series 'Delivering the Mails' produced in association with the British Postal Museum & Archive I have given a percentage of the proceeds from the sales of this sheet totalling £2,000 to the BPMA to support their charitable educational work.

Night Mail is a 1936 documentary film about a London, Midland and Scottish Railway (LMS) mail train from London to Scotland, produced by the GPO Film Unit. A poem by English poet W. H. Auden was specially written for it, used in the closing few minutes, as was music by Benjamin Britten. The film was directed by Harry Watt and Basil Wright, and narrated by John Grierson and Stuart Legg.

As recited in the film, the poem's rhythm imitates that of the train's wheels as they clatter over the track sections, beginning slowly but picking up speed so that by the time the narration reaches the penultimate verse the narrator is speaking at a breathless pace. As the train slows toward its destination the final verse is taken at a more sedate pace. The famous opening lines of the poem are "This is the Night Mail crossing the border / Bringing the cheque and the postal order".

The dialogue to the film is included in the sheet border:-

8:30 pm Weekdays and Sundays, the Down Postal Special leaves Euston for Glasgow, Edinburgh and Aberdeen.  The postal special is a fast express but it carries no passengers.  It is manned by 40 Post Office workers.  Half a million letters are sorted, picked up or dropped at full speed at night, or carried on for the morning delivery in Scotland.

At 34 points between London and Glasgow postmen wait with local mails to deliver them to the Postal Special.  The mails have been roughly sorted by district.  The postmen set up a net to catch the mails dropped by the train.  They strap up the mail bags in strong leather pouches.  The pouches are fixed to a standard by a spring clip.  The net is swung out for the train as it approaches the stand.  The impact releases the spring clip and the pouches are swept into the train.

Crewe - the main junction for the Midlands. Trains from Bristol, Cardiff, Manchester, Stoke, Liverpool and Birmingham bring a thousand bags of mail for the north between 10:57 and 11:39 pm. The scheduled stop for the Postal Special is 13 minutes.  500 bags must be unloaded, a thousand loaded, engines changed and some of the English crew changed for Scots.

North with a hundred tons of new letters to sort. The Postal Special picks up and distributes the mail to industrial England. The mines of Wigan, steelworks of Warrington and the machine shops of Preston

There are seven sorting vans on the Postal Special. Each sorter has 48 pigeon holes each representing a town. The packets are sorted separately. As the train progesses the names scribbled in chalk over pigeon holes have to be changed. When a pigeon hole is filled the letters are tied in a bundle. The bundles are put into the labeled bags hanging behind the sorters. When the bag is full, it is tied, labeled and sealed ready for despatch by apparatus for the next stop.