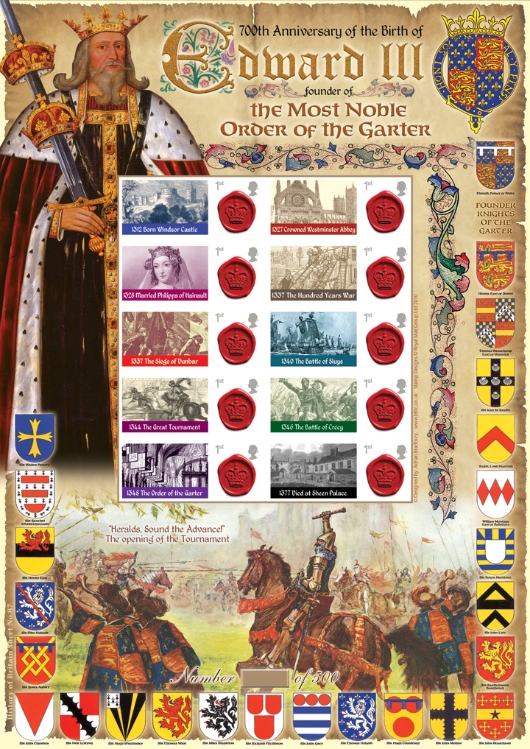 This year (2012) marks the 700th anniversary of the birth of Edward III who founded the Most Noble Order of the Garter.

This sheet is limited to ONE per household - please do not attempt to order more than one copy.

Edward III was King of England from 1327 until his death and is noted for his military success. Restoring royal authority after the disastrous reign of his father, Edward II, Edward III went on to transform the Kingdom of England into one of the most formidable military powers in Europe. His reign saw vital developments in legislation and government  in particular the evolution of the English parliament  as well as the ravages of the Black Death. He remains one of only five monarchs to have ruled England or its successor kingdoms for more than fifty years.

Edward was crowned at the age of fourteen, following the deposition of his father. When he was only seventeen years old, he led a coup against the de facto ruler of the country, his mother's consort Roger Mortimer, and began his personal reign. After a successful campaign in Scotland in 1333, he declared himself rightful heir to the French throne in 1337, starting what would become known as the Hundred Years' War. Following some initial setbacks, the war went exceptionally well for England; the victories of Crécy and Poitiers led to the highly favourable Treaty of Brétigny.

Central to Edward III's policy was reliance on the higher nobility for purposes of war and administration. While his father had regularly been in conflict with a great portion of his peerage, Edward III successfully created a spirit of camaraderie between himself and his greatest subjects. Both Edward I and Edward II had been limited in their policy towards the nobility, allowing the creation of few new peerages during the sixty years preceding Edward III's reign. The young king reversed this trend when, in 1337, as a preparation for the imminent war, he created six new earls on the same day.

At the same time, Edward expanded the ranks of the peerage upwards, by introducing the new title of duke for close relatives of the king. Furthermore, Edward bolstered the sense of community within this group by the creation of the Order of the Garter, probably in 1348. A plan from 1344 to revive the Round Table of King Arthur never came to fruition, but the new order carried connotations from this legend by the circular shape of the garter.

Polydore Vergil tells of how the young Joan of Kent, Countess of Salisbury  allegedly the king's favourite at the time  accidentally dropped her garter at a ball at Calais. King Edward responded to the ensuing ridicule of the crowd by tying the garter around his own knee with the words honi soit qui mal y pense  (shame on him who thinks ill of it).