What is a First Day Cover?


In brief, first day covers are specially designed envelopes with attractive Royal Mail stamps and pictorial postmarks.  These very desirable collectors' items are ideal for that unusual gift and look great framed. If you are looking for a gift, try our themes section - where you will find over a hundred different themes to choose from ranging from Aircraft to Wildlife. Many of the first day covers on this site have also been signed by famous people: stars, politicians, celebrities etc.

For those who want a more in depth description of what first day covers are all about, the following notes should answer all of your queries.

A First Day Cover is a specially designed envelope, bearing newly issued postage stamps which were postmarked on the first day that those stamps were placed on sale by the Post Office. The following three elements comprise every First Day Cover, viz: 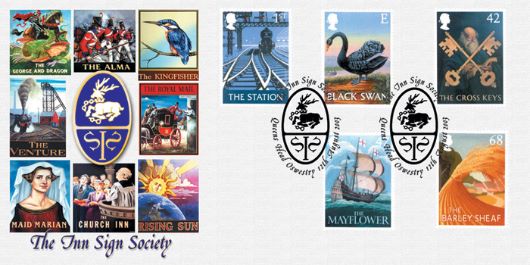 The above first day cover was produced to coincide with Royal Mail's special stamp issue featuring Pub Signs in 2003. The stamps have been franked with a special handstamp (postmark) at Queen's Head near Oswestry - one of the few locations which shares its name with a pub!

First Day Covers are often confused with Souvenir (or Commemorative) Covers. However, although they may look similar, they differ in one important aspect, namely: Souvenir Covers are usually issued to coincide with the date of a specific event or anniversary, whereas First Day Covers are issued on the same date as the new stamps. Both types of cover appear on this website and are easily distinguishable.

The covers (or envelopes) are available in a variety of makes, which broadly speaking can be split into two categories: Standard (or commercial) covers and Official (or sponsored) covers.

Collectors can find a wealth of information about the different covers which have been produced for British stamp issues by purchasing a copy of the catalogue Collecting British First Day Covers which is the only publication on the subject to have been published every year since 1981. For full details please click here. This catalogue lists alongside each postmark the sponsor's name and/or cover series reference.

Five types of postmark appear on first day covers. These are: 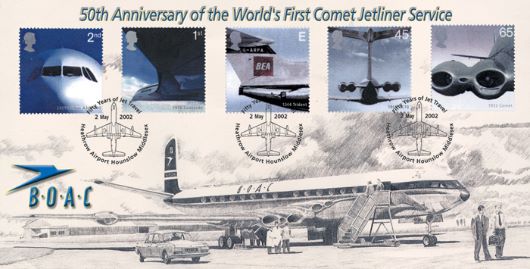 These are normally pictorial in design and are by far the most popular with collectors. They are specially applied by trained Royal Mail staff at one of their five regional Special Handstamp Centres (SHC). Modern techniques now allow for some very intricate designs. Anyone can sponsor a special handstamp by applying to Royal Mail. Notification of their use is advertised in advance by Royal Mail. Their use is not exclusive to the sponsor - collectors and other dealers/cover producers can send in their first day covers to receive one of these special handstamps. The cover shown above was produced to coincide with the 2002 Airliners stamp issue. The cover has the full set of five stamps postmarked with a Heathrow special handstamp. Virtually every special handstamp which has been in use on the first day of issue of a stamp issue is illustrated on this website and listed in the catalogue Collecting British First Day Covers - for full details please .

These are also known as circular date stamps and are the everyday postmarks used at Post Office counters around the country. Some collectors prefer this type of postmark because it looks more authentic than a special handstamp. However, because these are applied at Post Office counters, there is no guarantee of a good impression. Staff may have to work with over or under inked stamp pads or worn date stamps - these all affect the clarity of the postmark. Having said that, there are some very interesting cds postmarks available, e.g. there is a Post Office in the village of Rose (Cornwall) - which is a most appropriate postmark on any roses or flowers first day covers. The above Greenwich Meridian cover was franked at Clockface Post Office in St Helens - what could be more appropriate for the cover design?

As most sub Post Offices only frank Special Delivery mail (formerly Registered Mail), this is often the only way to obtain these postmarks. Covers have to be prepared with all the Special Delivery labels and the additional postage to cover the cost of the special service - since the change over to the Special Delivery Service these labels are normally placed on the reverse of the envelope, leaving the front free for the new stamps.

Stamps can been grouped into two main categories as follows: