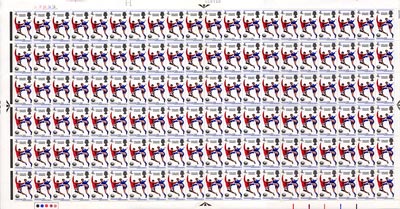 England's 4-2 victory over West Germany in the World Cup final at Wembley on 30th July 1966 spurred the Post Office into action. It was a matter of pride and prestige to issue a special stamp and to have it on sale quickly. A new design was out of the question - new stamps took months, sometimes a year or more in commissioning, design and production. The printers had to slot the work into their busy schedule, the stamps had to be proofed and approved by the Queen.

Only one course was open to the authorities and printers - to adapt one of the existing World Cup designs. The 4d design was modified by the addition of the magic words England Winners and the presses started rolling again. The stamps were placed on sale on 18th August - less than 3 weeks after the event.

The Post Office had made it known in advance that this overprinted stamp would be issued in much smaller quantities than was usual for a low value commemorative stamp. On the day of issue there were queues at virtually every Post Office in England (I managed to get time off work and queued myself - I remember it well). Stocks were quickly exhausted and many collectors were unable to get copies. Dealers too, were caught out and had insufficient stamps to satisfy standing orders or to prepare first day covers. The price of the stamp quickly soared reaching 15 shillings (75p) a copy - a staggering 45 times its original cost. For a short while the stamp was even quoted on the London Stock Exchange. After a while collectors and dealers began to realise that the stamp was not scarce at all and the price came tumbling down. Of course, that was over 50 years ago!

NOW IT IS VERY RARE TO GET A FULL SHEET OF 120 STAMPS!

For the foreseeable future I am no longer taking annual subscriptions or orders for the Stamp Organiser. There is a problem with the program resulting in difficulties to log in to your account. I can only apologise but it is outside my control. I will keep the database up-to-date as far as is possible, so when the problem is solved, the Organiser should include all the latest issues.
British FDC Catalogue