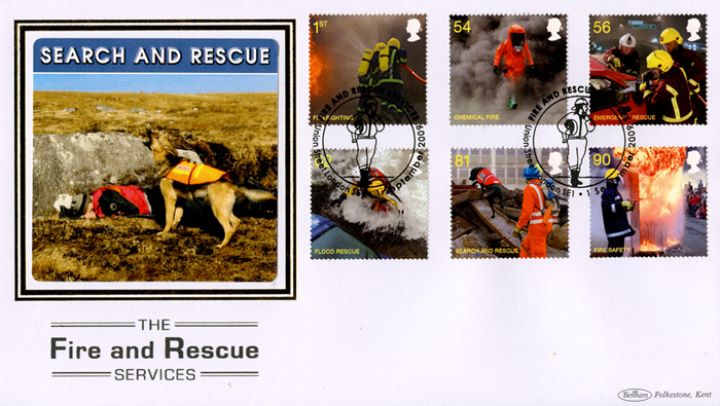 The above Royal Mail Fire and Rescue stamps were issued on 01 September 2009 by Royal Mail and feature the following stamp designs: 1st Firefighting; 54p Chemical Fire; 56p Emergency Service; 62p Flood Rescue; 81p Search and Rescue; 90p Fire Safety. The Search and Rescue first day cover with the London SE1, Fireman, Special Handstamp postmark has been produced by Benham and features these stamps which can make a very collectible and lovely gift.

Royal Mail is issuing six stamps celebrating the work of the Fire and Rescue Service - but what exactly does it take to be a modern-day firefighter?

It could be argued that, of all the emergency services, the UK’s Fire and Rescue Service has undergone the most radical changes in recent times. In the last decade alone the skills and responsibilities expected of a firefighter have increased and broadened across a range of different areas.

Take a look at the stamps and it quickly becomes clear; the dramatic images display examples of the dangerous and demanding situations that Britain’s firefighters face daily.
But thanks to training and technology, our firefighters continue to meet the daily challenge of keeping us, our families and our homes and businesses safe.

In recent years changes in the environment have placed greater demands on the fire service. During widespread flooding in 2007, fire crews rescued over 9,000 people as more than 55,000 homes and businesses were flooded, and with around 5 million people thought to be living in flood-risk areas, the threat of severe flooding remains.

Reacting to a major incident has always been one of the true tests of an emergency service, and it certainly proved to be the case in December 2005 when a total of 31 Fire and Rescue Services joined forces to tackle a huge fire at the Buncefield oil storage depot in Hemel Hempstead.

More than 40 people were injured following a series of large explosions, but fortunately no fatalities were recorded during this serious and dangerous incident. Firefighters controlled the blaze by using a massive 786,000 litres of foam concentrate, 53 million litres of fresh water and 15 million litres of recycled water.

Every day brings new challenges for the UK’s fire crews, but these highly trained men and women are ready for anything.

Designers Rose Design decided to explore the varied work undertaken by the Fire and Rescue Service through the use of commissioned and existing photography of training operations, and set out to portray the breadth, drama and action of firefighting and the many other important aspects of the Service's work.

The firefighters of the UK’s 58 Fire and Rescue Authorities are well trained in tackling the types of incidents described below – but it wasn’t always the case. There has been evidence of organised firefighting in Britain since the Roman invasion of AD 43, but it took the Great Fire of London in1666 to move things forward. Insurance companies offering the first type of fire cover were formed, enabling citizens to pay to protect their home or business in the unfortunate event of a fire.

The same firms also established private fire brigades specifically to respond to emergency calls from their policy-holders. Nine years after the Edinburgh Fire Engine Establishment was created in 1824, several London insurance companies merged to set up the first London fire brigade, laying the foundations for the modern fire service.

Modern day firefighters working for the UK’s Fire and Rescue Services are primed and ready to deal with a wide range of emergencies. Every shout is different from the last – from house fires caused by faulty electrical appliances or out-of-control barbecues to warehouse blazes, factory fires or arson attacks.

In December 2005, during the incident at the Buncefield oil storage depot in Hemel Hempstead, a total of 31 Fire and Rescue Services joined forces, using 786,000 litres of foam concentrate, 53million litres of fresh water and 15million litres of recycled water.

Most of Britain’s Fire and Rescue Services have at least one chemical incident unit whose firefighters have been trained to deal with emergencies involving hazardous materials.
Key roles include the containment of spillages, decontamination and environmental protection. Specialist apparatus, which varies between units, includes: radiation-monitoring equipment, chemical containment and absorption materials, leak-sealing equipment, foam concentrate, pumps for pumping up industrial chemicals, and drain blockers.

According to figures for 2007 released by the Department for Transport, there were a total of 182,115 road accidents involving personal injury, of which 27,036 involved death or serious injury. First on the scene of many road traffic accidents are members of the Fire and Rescue Service.

In addition to putting out vehicle fires, the fire crew must ensure that the surrounding area is made safe and the spillage of any hazardous substance is contained. In more serious collisions, firefighters are involved in freeing individuals trapped in the wreckage.

According to the Environment Agency, around 5million people in England and Wales now live in flood risk areas, and with the UK’s weather becoming evermore extreme, the nation’s Fire and Rescue Services now play a key role in responding to flood-related emergencies.

In summer 2007, widespread flooding placed great demands on the fire service. More than 55,000 homes and businesses were flooded, with over 9,000 people rescued. In terms of scale, the Fire Brigades Union described the rescue effort as ‘the biggest in peacetime Britain’.

Firefighters with training in urban search and rescue (USAR) techniques use specialist equipment to lift, cut away and remove debris from collapsed buildings and damaged vehicles to make the area safe enough to search for casualties trapped inside.

Members of each USAR unit are trained to use a range of specialist apparatus, including listening devices, communication probes, technical search cameras, cutting, drilling and breaking tools, heavy-capacity airbags, and propping and shoring equipment. Specially adapted vehicles are also used in USAR work.

Fire authorities across the UK have a long tradition of maintaining vital links within their local communities. From school visits and fire prevention talks to safety checks and smoke alarm tests in the home, local fire services play an important role in community life.

In 2002 the London Fire Brigade established Local Intervention Fire Education (LIFE) – an intensive five-day course that enables young people to learn a range of skills, including handson firefighting, first aid and fire prevention. LIFE has since been adopted by a number of regional fire services.