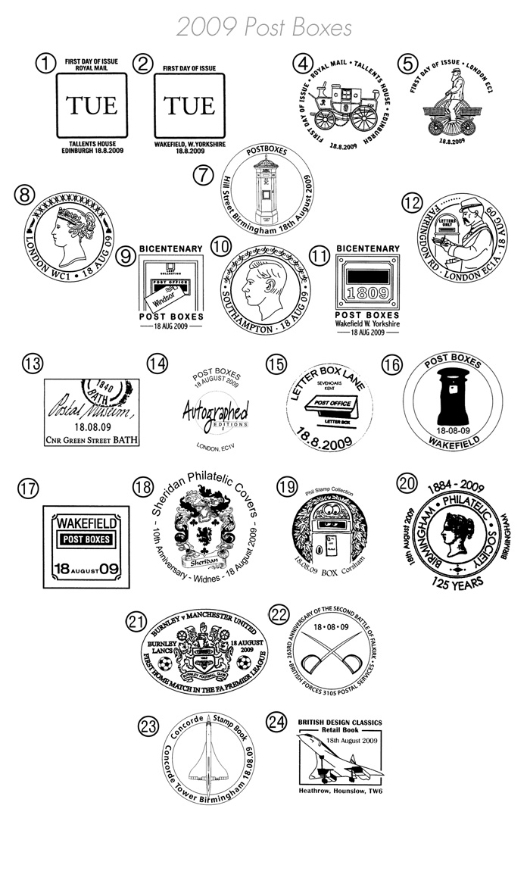 We’ve been using the pillar box’s little cousin, the post box, for more than 200 years and research has discovered that the earliest known post box was installed at Wakefield Post Office® in 1809. To celebrate this anniversary Royal Mail is releasing a Miniature Sheet of four stamps featuring iconic wall mounted Post Boxes.

Working in conjunction with the British Postal Museum and Archive and the Letterbox Study Group, Royal Mail Stamp design with designers Elmwood arrived at a shortlist of different post box designs and locations. Elmwood then worked with photographer Peter Marlow to capture the images of four iconic Post Boxes on film. The images were formatted into stamps and set within a border featuring the earliest known posting slot from the Post Office® at Wakefield.

Around 100,000 Post Boxes of all kinds exist across the UK, but which is which – here’s a quick guide… A post box is the overall title for any kind of posting box whether it’s standing proud on the pavement (pillar box), a smaller freestanding version (pedestal box), on, or in, a wall (wall box), or on a pole (lamp box).

The first Post Boxes, often just slots into the office, appeared over 200 years ago at Post Offices® for the convenience of people posting unpaid letters (the letters were paid for by the recipient).

Wall boxes as we know them today were installed from 1857 as a cheaper alternative to pillar boxes, and have established themselves as a national icon, serving the needs of smaller communities. The first pillar boxes were installed in 1852 in the Channel Islands and 1853 on the mainland.

This example with the royal cipher of George V was cast by W T Allen & Co Ltd, London, between 1933-36, and is from Cookham Rise near Maidenhead.

Introduced in 1887 this type of standardized box derives its name from the foundry where many of them were made. This example is from Bodiam, East Sussex.

The lamp box could also be attached to lamp post or other such structure. This example is from Hythe in Kent and was installed in 1896.

The fully illustrated Presentation Pack contains the Post Boxes Miniature Sheet. Inside Martin Robinson of the Letter Box Study Group looks at the history of the Post Box. The Pack was designed by Elmwood and printed by Walsall Security Printers.

Five Postcards bearing enlarged images of each of the Post Boxes stamps and one of the Miniature Sheet go on sale about a week before the stamp issue date. Printed by Fulmar Colour Printing Company Ltd.

The Generic Sheet will contain 20 First Class Post Boxes stamps together with labels featuring archive photography of Post Boxes. The Generic sheet is designed by Elmwood and printed in litho by Cartor. The size is A4 – 297mm(w) x 210mm(h)

Discover some of the amazing artefacts held in trust for the nation by the British Postal Museum and Archive - including a stamp pane featuring all four of the Post Boxes stamps.

One featuring four 1st and four 20p Definitives, both stamps bearing the double image of Queen Elizabeth and Queen Victoria from the 150th anniversary of the Penny Black stamps, set around a Penny Post label first issued in 1990;

A pane featuring all four of the Post Boxes stamps;

The book is written by Douglas Muir, Curator of the British Postal Museum and Archive, designed by Silk Pearce and printed in lithography by Cartor Security Printing.

The numbers alongside each of the postmark images relates to the entry in the catalogue Collecting British First Day Covers Published each year since 1980, it is regarded as the ‘bible’ by collectors of British FDCs Catalogue.
Released with
Miniature Sheet